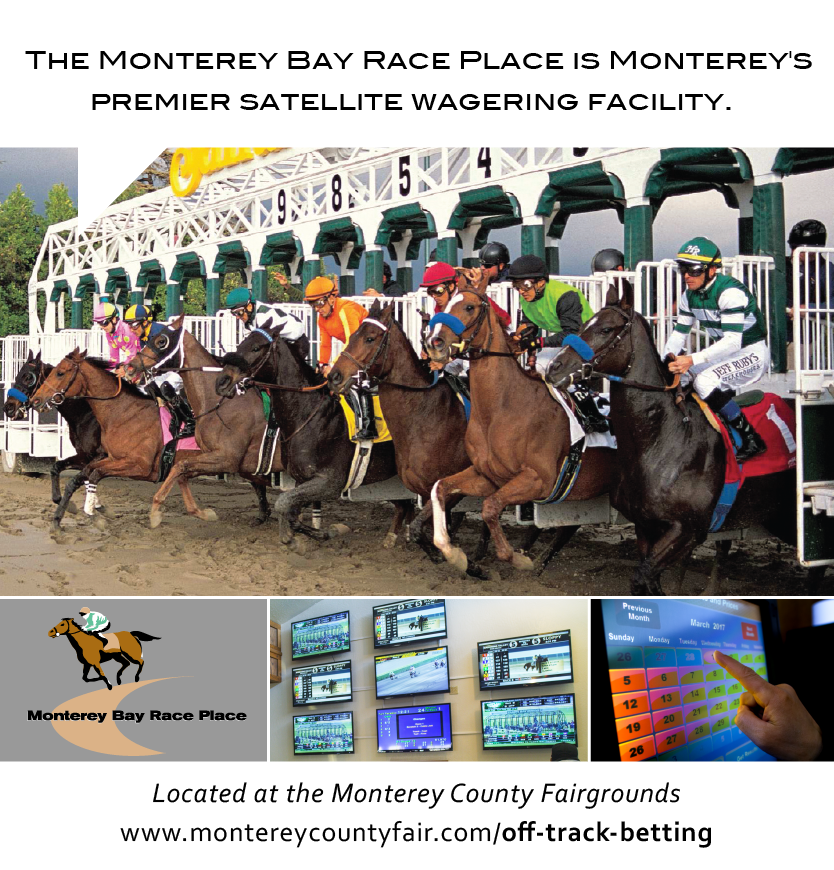 Special Days:
First Thursday of the month free for Seniors

You hear people win big on the Derby. You’ve seen it on TV Shows like the Soprano’s and stories from your grandpa, yet you’ve never placed a bet in your life. It’s actually easier than you think to get in on the fun! FYI – the average $2 exacta bet pays out $85!

We’ll break it down as follows:
– Who we are
– What you can bet
– What to say at the window
– Payout facts you should know

Let’s start with who we are first.
The Monterey Race Place is a Live Satellite Wagering Facility. This means you can wager on a race in Florida, Dubai or Australia right from our location in Monterey via our Satellite Feeds, just like Dish Network only with access to horse wagering right in our house.

Unlike Vegas, You’re Not Playing The House.
In Satellite Wagering it’s not us vs. you. It’s you vs. the pot of all the wagers from around the world – at the tracks or at Satellite Facilities like ours. We’re actually here to help you because we get a modest cut of winnings and only if you win. You win, we win. This is just like the store that sells the winning lottery ticket scenario.

The First Step – Realizing What You Can Bet.
The Monterey Race Place provides all the racing literature that is available to everyone else. Combined with the local paper, you have access to as much research as anyone. With your best pick in mind it’s time to head to the window to place your bet.

The easiest bet in all of sports is simply to pick the winner. Horse racing goes above and beyond picking the simple winner and allows for several bets per race. Here’s the basic menu of bets:

The Second Step – To The Betting Window.
Sitting back and watching is all fun and good, but you don’t want to go up to the betting window – that’s for the people who know what they’re doing. It’s actually easier than you think.

Once you’ve decided how you’re going to bet, just step up to the window and place your bet in the following order:

First: Say the name of the track (Golden Gate, Aqueduct, etc.) This is important because Roberts Communications broadcasts races from many tracks simultaneously.
Second: Say the race number.
Third: The amount of your bet. For Win, Place and Show bets, the minimum amount is $2. You can usually play exotic wagers (Exacta, Trifecta, for example), for $1 units.
Fourth: The type of bet. (Win, Place, Exacta, and so forth.)
Fifth: The number of the horse.

We are excited to announce the beginning of a new horseplayers club in California; the CalRacing Club.

Below we lay out the in’s and out’s to horse racing.
CalRacing Club members will also enjoy benefits such as:

* A qualified admission is defined as one paid admission per facility per day. Restrictions may apply, check with local facility for details. Admission price may vary by facility.